Last year was a career year for a handful of LA Kings. That being said there are room for improvements. Here are the players who didn’t exactly play up to their potential last season who will look to rebound this season.

I’ve seen a LOT of articles this off-season speculating on players who may lose a step next season and it got me thinking.

We usually only tend to look at player’s upsides post trade or as prospects trying to find a permanent spot on their team. If you want to read up on that check out this article I put out in late July.

To change that trend we’re taking a look at 5 LA Kings, who aren’t going to be rookies, that are bound to break out in the 2018-2019 season. 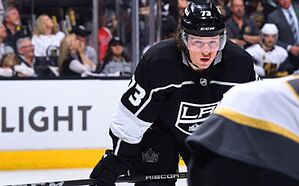 LOS ANGELES, CA – APRIL 17: Tyler Toffoli #73 of the Los Angeles Kings lines up for a face-off in Game Four of the Western Conference First Round against the Vegas Golden Knights during the 2018 NHL Stanley Cup Playoffs at Staples Center on April 17, 2018 in Los Angeles, California. (Photo by Juan Ocampo/NHLI via Getty Images) *** Local Caption ***

Tyler Toffoli – Toffoli is an interesting case. He didn’t have a bad season in 17-18 he put up his second best goal total (24) and third best point total (47). The difficult pill to swallow is his career season, so far, was under a Darryl Sutter style defensive team.

With the coaching change and an emphasis on offense Kings fans expected Toffoli to break out and eclipse the 30 goal mark again and at the beginning of the season, he seemed primed to do so.

Toffoli had 17 goals by game 39 and the end of the 2017 calendar year, it wasn’t going too far out of the box to assume he’d net about 34 goals if he had as strong of a second half of the season.

He didn’t. Toffoli would only manage seven more goals on the season scoring one in january and none in April.

There could have been many factors to this sharp decline. The NHL season is long and strenuous and we saw a couple of LA Kings begin to slow down in the latter half of the season.

Toffoli was the best player on the Pearson-Kempe-Toffoli line, he was physical when he needed to be, he had a nose for the net, he has an elite shot, but he just wasn’t ready to take on that role that Jeff Carter’s injury had left open. He was fatigued.

Toffoli had a good season for a second line winger but on an LA Kings team where the last couple seasons fans have wondered which is the true first line, Kopitar or Carter, Toffoli didn’t make a good case for That 70’s Line.

His poor second half wasn’t helped by a demotion to the third line in the dying months of the LA Kings season.

He will “bounce back” this season. He’ll be well rested and you can project him to hit 30 goals and 65-70 points but I don’t even think that it’s still his full potential. If Toffoli finds his footing and was the player he was in 15-16, he is a potential 40 goal scorer.

It will be interesting to see how The Tale of Two Toffolis continues this season.